I love Breaking Bad. I love every single flawless second of it. Walter White’s dark and twisted journey makes for one hell of a roller coaster ride. This section of my site is called “The Greatest TV Show Ever Created” and I created it in order to express my admiration towards LOST, but having just finished the first eight episodes of Breaking Bad’s last season I can’t help but admit what Breaking Bad is, truly the greatest television show I’ve seen. Here is my list of the greatest episodes of Breaking Bad.

This episode is proof that though incredible since the beginning, Breaking Bad just gets better with age. This first episode of the fifth season opens with a brilliant scene that simply teases at just how insane this final season will get. It then ties up some loose ends left after the showdown that was Season 4 in a truly exhilarating fashion all while we watch as Walter settles into his new seat of power. 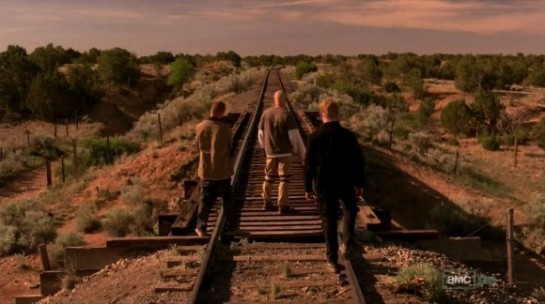 Breaking Bad is and was always amazing from the first to the fifth season, but if you look through my list you’ll notice that I’ve included no episodes from either the first or second season. The first two seasons are just as incredible as the rest, but I for one enjoy the characters and story arcs of other parts of this deep, dark and human epic. One example is this brilliant train robbery, which tragically ends in true Breaking Bad fashion. 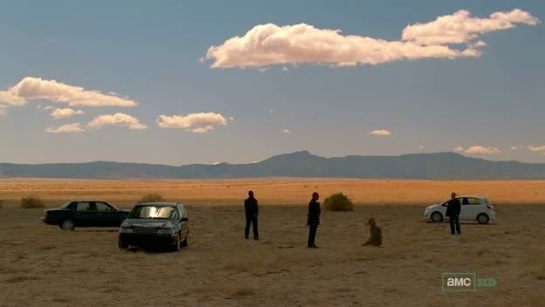 Vince Gilligan himself, the mastermind behind the creation of this tale, has often compared the entirety of season 4 to that of a chess game between Walter White and Gustavo Fring. If that’s true, which it is, this episode represents Gustavo Fring putting Walter White in check as everything in Walter White’s life quite seriously falls apart around him. In all this madness and sadness what else can the depraved man they call Heisenberg do, but laugh.

This is just a no-brainer. It cannot be argued that this is one of the finest hours of Breaking Bad. From the intriguing beginning of season 3, we are brought on a journey of two seemingly soulless men intent on killing the antihero of our story only to be vanquished by the true hero of our story. In one fell swoop Breaking Bad allows its two main characters to come back together as friends and partners all while Heisenberg’s ironic guardian angel saves his ass quite savagely. 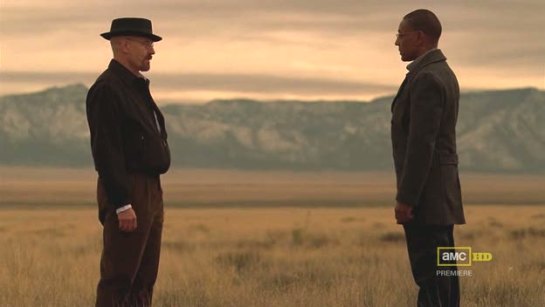 After the extraordinary masterpiece that was Half Measures, all you could expect was sheer brilliance from the season finale entitled Full Measure. “Never give up control. Live life on your own terms.” It’s a defining quote from season 4 and this episode exemplifies exactly how far this king will go to continue his rise to power. Full Measure opens with a beautiful scene as Heisenberg approaches his adversary wearing his crown. How else could the episode end, but with a gunshot brought about by one of his subjects.

Walter White is a liar. He is depraved, vindictive, manipulative and he is a villain. We have watched as Walter White has slowly and subtly become this villain. No matter how Walter chooses to rationalize it, he loves who he has become and this power he’s obtained. “You’d be selling to my competitors,” Walter snarls at his former partners as they tell him their selling out for “pennies on the dollar”. Among many ideas, Breaking Bad is a story about change and in Buyout, Walter White can’t help but show his now true colors.

If the statement I made before is true and Crawl Space is Gus putting Walter in check in their game of chess, Face Off is Walter White putting the kingpin, Gustavo Fring in checkmate. Whereas Walter White has become a criminal mastermind, Fring is a brilliant businessman. That is not to say Gus isn’t a villain because he is, but it is Walt’s will to do evil that allows him to defeat this king. As an added bonus, the cartel’s involvement in this story really comes full circle as Walter’s enemies become a means to obtaining his goal. This list wouldn’t be complete without this episode.

Half Measures is an episode I’ve been attached to for a long time. Until recently it was the episode I would’ve considered my favorite. The ending of the episode just may be the best moment in the show. That just turns out to be a punctuation point to this episode about character and choices. Right in the middle is a seemingly odd scene that subtly becomes serious, dark and poetic. It also serves as a little coming out party for actor Jonathan Banks as he becomes Mike Ehrmantraut when illustrates why a man can’t choose half measures when they should go all the way.

I will change this list if it has to be done and I can easily see that happening, but this mid-point marking episode to Breaking Bad’s final season is incredible. I couldn’t help to place it right here as my second favorites episode. We witness, in a single episode, a Walter White who actually enjoys his reign as king to the point of boredom. Heisenberg, through sin and carnage, has reached his peak. He is king, but the fact that he doesn’t have to fight for his crown anymore makes him weary. He was more of a king than Gus Fring ever was and he will want for nothing as he sits back with his family and friends only for the hero of our story to realize the identity of the villain he would’ve willingly chased to his last breath.

I have seen every Breaking Bad episode and most of them I’ve seen a few times. I can say without a doubt that Say My Name is my favorite Breaking Bad episode. For a long time I considered Season 3 my favorite season, but with just 8 episodes Season 5 has managed to top the eloquent masterpiece that is Season 3. The beauty of Breaking Bad can be found in its characters and at the heart of these human stories is the character arc of Walter White.

In this episode we come face to face with the depravity that is Heisenberg. Walter White is a ruthless, criminal mastermind whose reputation proceeds him. In this episode Walter White has become a king and in the wake of this rise, there are many lost lives and lost friendships. It’s hard not to be speechless throughout and then it ends with what may be the greatest scene in Breaking Bad as Walter is consumed by the black heart beating inside of him and kills cool and calculating old professional Mike, Gus’ righthand man turned Walter White’s distributor. It’s a gritty, defining moment executed flawlessly with just character development and intense violence.