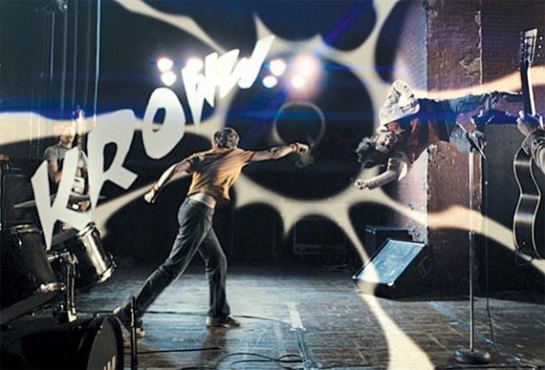 Scott Pilgrim isn’t a movie, it’s a 2 hour roller coaster ride with the same rush of adrenaline, except add in jokes and a story. It’s like no other movie experience I’ve ever had and I loved every moment of it. Scott Pilgrim was just pure entertainment, that’s the best way to put it. That’s the best way to put it, honestly. I loved it and I can’t wait to see it again.

Scott Pilgrim vs. The World was actually one of the few movies I’ve seen in theaters with out seeing any trailer for. I literally saw about 5 seconds of a commercial on T.V. and flipped the channel. I thought to myself “wow, is this really what movies are coming to these days?”. It looked awful, after I saw that little bit of commercial and found out what it was about I thought there was no way in hell I would ever see this movie. Then I found out later that it was directed by Edgar Wright.

I absolutely love Hot Fuzz and Shaun of the Dead. Each time I watch those films I always think, “GOD, this guy has to make more movies”. So when I found out Edgar Wright was the director of Scott Pilgrim vs. The World, I was still a bit weary, but I had to go see it. Even if I just told you the story right now, you’d probably think it sounds incredibly stupid, but just bare with me.

The film is about a guy who starts dating a girl, but in order to stay with said girl he must “defeat” her “Seven Evil X’s”. Yes, its basically a video game, with a tutorial mode (or Act I) and seven levels (Acts II and III). Now if you go in accepting the fact that this movie is like no other movie you’ve ever seen or probably will ever see, you will love this film. You don’t even have to enjoy video games to like this film. It’s still absolutely hilarious no matter what.

Basically, Scott Pilgrim vs. The World is fantastic. It’s a movie I can’t wait to own so I can experience it again and again. For it’s story of romance, for its blood pumping action and most of all for the laughter that ensues in basically every scene. Scott Pilgrim has honestly become one of my favorite comedies. As I’ve said before, Edgar Wright is a freaking genius and needs to make movie movies.