2008 was a great year for film and most of all it was a great year for performances. I decided a while ago I wanted to make a list involving performances this year and I just could not bring myself to making it a top ten because there were way to many good performances this year. I finally decided on a top 25 and I’m proud of my list. I think most will enjoy it too. What I love about this year was every performance should such a wide range in emotion, sure some more than others, but I’ve thought long and hard about this list and here it is:

Viggo Mortenso always does a good job and its very unfortunate that he doesn’t get that many roles to work with. Then when he does have a really good role, like he had las year in Eastern Promises, there’s always someone better (Dainel Day-Lewis). One day he’ll win an oscar, but until that day I’ll just watch him in great roles like this.

Tom Wilkinson is a fantastic actor and sure you sort of hate the character he’s playing here, but that was sort of the point and he’s absolutely perfect in this role. He had the same type of role in Batman Begins and he got o change it and expand on it here. I loved every second.

Daniel Craig is the perfect Bond. There is not one person I would rather see playing this part. The movie wasn’t as good as the first (only cause the first was amazing), but Craig stayed consistent and that’s very nice to see.

I absolutely hate Tom Cruise with a passion, I do not like him at all, never will. Least favorite actors: Tom Cruise and Ben Afflek I did not like Tropic Thunder at all, but the only parts I did laugh involved Tom Cruise. It pains me to say this, but he was hilaurious, I loved every short second with his character.

Here we find a fantastic actor in a very different role, normally you would probably find Gary Oldman playing some kind of villain, whether he’s a drug dealing pimp (True Romance), an intergalactic salesman (The Fifth Element), or even a crazed dirty cop (The Professional). Here he’s one of the few good cops in the city he’s trying so hard to help save and he’s absolutely fantastic.

Josh Brolin didn’t have as big a part as you would’ve hoped in Milk, but he worked with what he got and created a spectacular performance. This is a very different character than you’ve ever seen him play and he chewed up every second he was on screen. He ofcourse didn’t have the best performance in Milk, but was a close second.

Jeremy Irons is a fantastic actor, who once again doesn’t get enough work. I love all roles I’ve seen him in and here is a western where he plays a gunslinging villain. I get chills just thinking about it. He does a fantastic job, and as always plays a highly believable villain here.

This was a great year for Robert Downey Jr. and he found his best performance of the year in a cocky and sarcastic billionaire he in his spare time flys in a battle suit and saves lives. Robert Downey Jr. was fantastic in a role you could just tell he had a blast playing.

RockNRolla had many likable characters, and even more likable actors, as do all of Guy Ritchie’s movies. One stood out above the rest and that was Mark Strong who played Archie, the loyal right hand man to the crime boss Lenny Cole (Tom Wilkinson). He was amazing. It might be in part that I hadn’t seen him in any movies before, but either way, RockNRolla deserves a watch by all if only just to view his performance.

Brad Pitt is shortly becoming one of my favorites. If you can forget about roles he played in Mr. and Mrs. Smith and the Ocean’s movies, he’s actually a really good actor. In Burn After Reading, he’s absolutely perfect as the dim-witted, peppy, gym worker, he stumbles onto something bigger (or actually probably smaller) than he thinks.

Choke was a highly disappointing movie especially sense the book was a masterpiece, but that doesn’t exclude the fact that Sam Rockwell was born to play this role. Victor is an amazing character and you needed a great actor to play him and no one, and I repeat, no one would’ve been able to be better than Sam Rockwell in this role.

Dev Patel was fantastic and I’m thinking that because I haven’t seen him in other movies and that’s why he made this part so real, but all I can say is that he was great and played the role to its full potential. 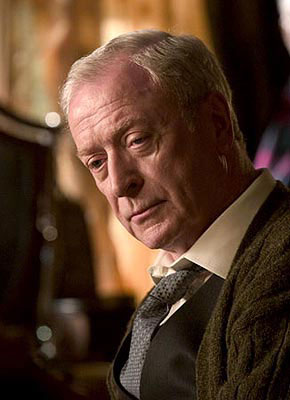 Michael Caine is a really good actor and here we find him in a perfect role that could be played by many actors, but absolutely no one could’ve played it better. He had a much bigger part in this film as opposed to the first and that made me very happy, because he made every second golden.

Christian Bale is the perfect Batman. People say how he has a corny voice and it just annoys the crap out of me. What people don’t understand is that Christian Bale is ten times that Batman that George Clooney, Val Kilmer, Adam West, or Michael Keaton will ever be. He’s better because he knows, unlike them, is that Batman has to be three different people. The cocky Bruce Wayne you show to the public, the real Bruce Wayne you show to Alfred, and Batman. He plays the part perfect, I have zero complaints. The voice is amazing.

Ralph Fiennes is fantastic in what ever he does. Bad movie, good movie, doesn’t matter, he’s good always. In Bruges is a great movie and he’s incredible in it as, the fast-talking, loud and dirty mouthed crime boss. He unfortunately just barely misses my top ten. He’s fantastic in all movies, but especially in this one.

Russel Crowe is on and off for me, but in my opinion, you find in Body of Lies, what I feel to be one of his best roles. He’s not a villain, but he’s definately not a hero. He’s a sleazy fat guy who trys to do the right things in the wrong ways, but never gets screwed, he has others get screwed for him. Russel Crowe was great and was the perfect choice for a this great character. 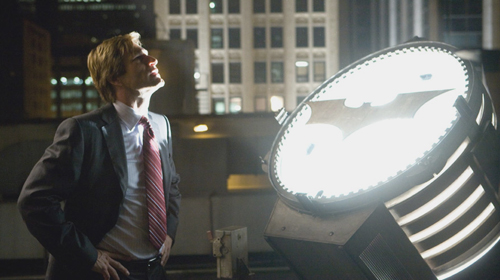 Aaron Eckhart is an up and coming actor. He’s going places, he was amazing in Thank You For Smoking and he’s amazing here. He plays a very entertaining role the goes from pure good, to almost pure evil. He plays the role to perfection and not many actors could’ve.

W. was a great movie and it was great in part because of Richard Dreyfuss’s performance. He plays Dick Cheney, whose actually sort of the villain in this pitch -perfect biopic of our most recent president. The movie was great and he’s great in it. He made such a great transformation, I actually looked past his highly recognizable voice and had to wait for the credits to role to figure out it was him.

Once again Brad Pitt proves that he’s becoming better and better with each role he plays. The Curious Case of Bejamin Button is no different. This would be a very tough role to play for anyone, but Brad Pitt played it to perfection. This was a long movie, but it felt shorter than it was because of this performance.

Whether you liked W. or not, you had to admit that Josh Brolin was fantastic as Bush. He got everything down pact. This was a movie that had to be driven by performances and direction. Well, your gonna have the direction if you got Oliver Stone and they certainly got the the performances in Richard Dreyfuss and especially there leading man, Josh Brolin.

It’s pretty unfortunate that this very well could be Eastwood’s final movie. I pray that it’s not, but either way this was the perfect role for him and he played it to perfection. He had to be grumpy and racist, but then he had to make the transformation to hero and because of his incredible performance, this was a really goo movie.

Well for my top 5, number 4 was much better than 5, and pretty close to 3, while 3 and 2 are basically a tie, and 1 is so far beyond the others to the point of insanity, but here we are at 4 and we find Sean Penn’s name. He was amazing in Milk and this was probably his best role. He deserves all the praise he’s getting, but he does not deserve the oscar. Sean Penn made the role his own and did it with flying colors. He was FAN-freakin-TASTIC, but unfortunately this was a year of amazing performances and there were a few better than him.

Mickey Rourke performed masterfully in The Wrestler. He was showed such large amounts of emotion and he made every feeling so real. It saddens me to put him this far from the top because I could name a lot of years where I would’ve most certainly given him the top spot. Some people are saying that he didn’t do as good as others just because he’s supposedly just like the character he’s playing, well that’s load of crap and actually probably compliment to him because your saying he’s a better actor. Mickey Rourke deserves more roles and after this perfect performance, I see many to come.

The number 3 and number 2, as I said before are basically tied for second in acting ability, but I just had to give Frank Langella the second spot because he just showed more of a transformation and much more charisma in what is unfortunately a much more entertaining character. Frank Langella deserves the oscar, even though he probably won’t get it. I’ve read in a couple places that he’s more Nixon than Nixon is. That doesn’t make kuch sense for someone who hasn’t seen the movie, but it completely makes sense. Langella fully embodies our 37th president, whether is the voice, the posture, or the ticks, he made a role to be remembered.

Anyone who reads my sight probably saw this coming, but here’s the thing. I don’t just think this is the greatest performance of the year, I truthfully think this is the best performance I’ve ever seen. It’s not just the fact that Heath Ledger passed on and I’m just giving him a pity vote. I believe he will and would’ve won the oscar either way (knock on wood). If he doesn;t win the oscar, I will never watch the oscars again, which will be very hard for me, because I love watching the oscars, but if Heath Ledger does not win, in no way does it deserve my viewing or anyones viewing for that matter. Every moment The Joker appeared on screen I just stopped breathing for a second because I didn’t want to miss a second. He made absolutely every word he spoke memorable and he created the greatest character ever put on screen. Heath Ledger created a character with nervous ticks, subtle emotions, and feeling ironically only for the one person he’s supposed to hate. In Heath Ledger’s character we learn not only, that there is no good without evil, but also we learn what acting is truly about.