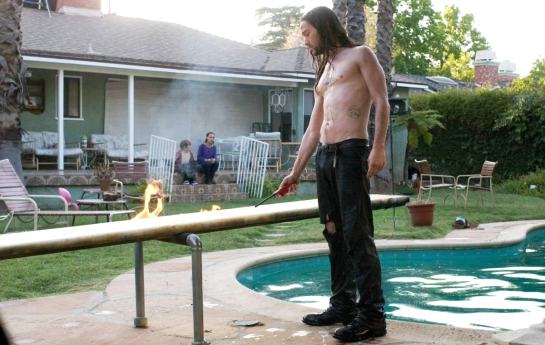 There are a lot of different reasons to see a movie. Most of the time it’s because you want to be entertained, maybe it’s because you want escape, maybe you want to appreciate the art or maybe you like the director whose making the film. I hadn’t heard much about Hesher, but I did know Joseph Gordon-Levitt was starring as the title character in a role that was completely different from any he had ever taken before. I love Joseph Gordon-Levitt and he was the reason I saw this movie.

This was a very unique film to say the least. In terms of the messages it tried to establish, sure there was nothing new here, but what made this film so innovative was in the dark ways it established the themes. It was also a film that never failed to make you laugh on occasion. It was certainly what you’d call a black comedy, but it also had a lot of heartfelt moments and none of it felt forced. I could certainly see how this film might not be able to grip everyone, but Hesher truly captivated me through out.

Hesher follows the story of a young boy, TJ (played very well by Devin Brochu), and his father (Rainn Wilson who is cast out of character and pulls a lot out of the smaller part he was given) who have both just lost someone very dear to them in a car accident. TJ finds a new quasi-friend in the rebellious and anarchic Hesher (Joseph Gordon-Levitt) who may very well be the tough and unusual push to get this father and son living their lives again.

Joseph Gordon-Levitt is just astounding as one of my favorite characters to come out of cinema this year. He swears, he lights stuff on fire, he’s vulgar, he’s intimidating, he’s threatening, he does not give a shit, but when the time calls for it he doesn’t hesitate to get out of his tough exterior and show that he does have a beating heart. The character is defined so well in the writing and Levitt plays him flawlessly. The film is worth seeing if only for his performance. The rest of the cast was pretty great as well and that includes Piper Laurie as the lovable Grandma and Natalie Portman as the store clerk TJ falls for.

Hesher was just an extremely entertaining film through and through. Was it some kind of perfect film? No, but any slight flaws it had I found myself forgiving because I couldn’t stop rooting for these characters and some kind of satisfying ending. Well, you can’t really expect much from someone who is so apathetic, but Hesher delivers.