It’s truly hard to put my finger on exactly how I felt about 30 Minutes or Less. I found my self enjoying a handful of scenes during this movie which was surprising because it clearly is not a very good movie. The execution during parts were certainly on, but during others it just seemed like they were striving to have a coherent story when in fact it was just falling a part. 30 Minutes or Less was just a very odd, dark and a subpar comedy with some fun action thrown in the mix.

First off, knowing that this is actually based on a true and very disturbing story just makes you uncomfortable to be watching the situation being made light of. Looking passed that though, the fun of this film came from the pair Aziz Ansari and Jesse Eisenberg. The delivery was there with both of them and they were very funny.

There’s this belief in regards to performance sometimes that essentially states ones voice is the same as portraying a character. Though Jack Torrance (The Shining) and R.P. McMurphy (One Flew Over the Cuckoo’s Nest) have the same unique voice, they are two completely different characters played to perfection by Jack Nicholson. No, Jesse Eisenberg’s performances aren’t to the caliber of Jack Nicholson, but he does however do a great job here portraying a different character from his other roles.

The pair in this film are not so enjoyable (Danny McBride and Nick Swardson). I for one do not find Nick Swardson very funny at all regardless of the role he’s playing. I’m open for surprise, but with his character here, I got what was expected; a bad comedic performance. The same could really be said about Danny McBride, I get what he’s going for, but its simply not that funny. Whereas his comedy might work in some aspects in a great comedy like Pineapple Express, it really doesn’t work in a subpar comedy like this.

At the end of the day, if you go see 30 Minutes or Less you might laugh occasionally, you might be entertained at other points (the actual robbery, the car chases, some of the story driven scenes between Jesse and Aziz), but at some point, most likely, the obvious fact will be realized; you’d rather be watching something better. 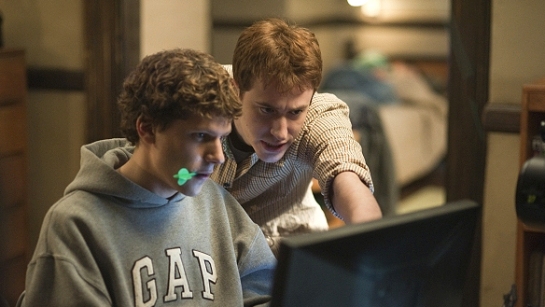 The Social Network is a movie I’ve been anticipating since it was announced. I had never read the book, but was always a bit interested in the concept then when I heard that David Fincher was directing the movie, I just couldn’t wait. Everything in my heart told me that The Social Network was going to be a fantastic film. I had no doubts and what I got was nothing less than that. The Social Network was a spectacular film.

David Fincher has been the director of such amazing films as SE7EN, The Curious Case of Benjamin Button, Zodiac, Fight Club etc. I can honestly say without a doubt in my mind that after Fight Club, The Social Network is the greatest film he’s made. When looking back on his career, Fight Club and The Social Network will be the movies he’s remembered for.

The Social Network is the masterpiece that the world needed. It fully encapsulates the idea of “Next Generation” like no other film has ever been able to. Its a film that doesn’t have action or violence. It doesn’t have a good guy and a bad guy. Its just a story about humans and their nature. A story that was necessary and extremely entertaining because it was told brilliantly.

Movie reviews have been floating around the internet on this movie and being the lover of movies I am, I couldn’t help but take a glimpse over a few of them. It seems that a good majority agrees with each other on this films brilliance, but there are many with complaints. Some have problems with its depiction of Mark Zuckerberg as a villain, while others don’t care for the fact that bits of the story aren’t true.

First off, if I wanted the truth on the matter I’d go out and read a newspaper. If I were that interested, I would find the truth. A movie theater isn’t a classroom, its purpose isn’t to inform us or teach us anything. A film’s purpose is to tell the greatest story that can, while expressing their own ideas and morals. The film wasn’t a documentary and if you’re expecting one, don’t see the movie. A film takes us on adventures that we would’ve other wise not been able to enjoy; such as life as a bug, traveling through middle-earth or in this case, the rise of one of the most notable business empires of our generation.