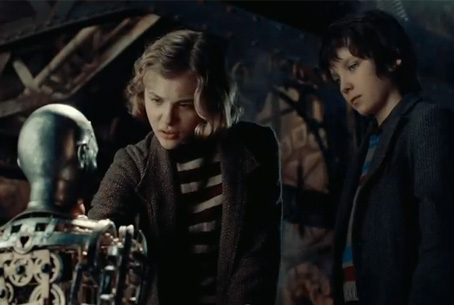 Hugo was just one of those films where I sat down and had no idea what I was about to watch. Aside from what a few underwhelming previews offered, I had virtually no expectations for this film. I knew the film had Sacha Baron Cohen in what seemed like some type of antagonistic role, it had Ben Kingsley, it seemed that it was a family film starring a young boy and the story had something to do with a train station. I didn’t know much, but I knew I had to see the film for one reason.

Martin Scorsese is one of the greatest film makers to have ever lived and I would never miss the chance to see one of his films. Scorsese’s latest film, Hugo, follows a seemingly derivative children’s story about a young loner and his adventures in a train station. Very early on the film feels as though it will become redundant and disappointing by the end, but past a certain point Scorsese establishes that Hugo is no ordinary family film, but instead a fascinating tale that serves as a parable about innocence and why we love going to the movies.

In a perfectly adequate performance, Asa Butterfield plays Hugo a young boy whom on the eve of the loss of his father attempts to fix a broken mechanical man that he and his father had been working on before his father’s untimely death. The intelligent boy considers it his duty to fix the clocks in the train station he calls home all while stealing different trinkets to fix his mechanical man. He runs from the station inspector when necessary and eventually befriends the daughter of a cranky old Toy Shop Owner who’s harboring a mysterious secret.

I’ve already said too much though and this celebration of film in general is one worth attending for yourself. I will say that I was not fully gripped or entertained by every aspect of Hugo, but the passion that went behind the making of this film can not be ignored. When I first heard about Hugo I wondered; why would Scorsese make a children’s film? He certainly answered my question and while this isn’t a masterpiece like so many other Martin Scorsese movies, it is a very powerful film and one that needed to be made.

Any time you make a sequel you run the risk of disappointing a lot of people. More often than not if you make a sequel the people who are watching it have seen and enjoyed the first one. You could make   one of those rare sequels that are actually better than the original, you could make one that’s right on par with the original or you could go the same route as Sherlock Holmes: A Game of Shadows and be very disappointing. I am an avid and of the first Sherlock Holmes movie and Guy Ritchie’s other films and I will say that with out a doubt, this is the worst Guy Ritchie film I’ve seen.

This was a film that I was very excited for. Unlike a lot of people I was actually a big fan of the Sherlock Holmes and what Guy Ritchie had done with the story and I couldn’t wait to see what he’d do with Holmes’ nemesis, Professor Moriarty. I was even excited about character actor Jared Harris playing Moriarty whose performance was the most redeeming quality of this film. Unfortunately, even a good villain wasn’t enough to save the rest of the film from falling a part.

Right from the beginning there was simply something off putting about the film and it went essentially nowhere compelling from there. A lot of it just felt like one extremely dull moment after another just to lead into another one generic action sequence after another. My favorite moments of the film were the scenes between Holmes and Moriarty especially a final climactic scene involving a game of chess. Unfortunately, the rest of the film was nearly captivating enough and the decently satisfying climax was not worth the wait.

Almost everything I enjoyed about the first one I found was overplayed and almost, at times, unbearable in this one. The chemistry between Robert Downey Jr. and Jude Law was there, but there relationship just became more accustomed to joke-telling than with actual character and story development. Worst of all though, I felt as though the female lead was just tossed into the film so that the film could have a female lead. Noomi Rapace did a fine job, but here character was about as unnecessary as this film.

Sherlock Holmes: A Game of Shadows was just not a very enjoyable experience. Admittedly there were parts of the movie that were fun, but when you combine those scenes with the rest of the film you get two-hour movie that just simply was only worth the price of admission because it had the honor of showing a “The Dark Knight Rises” trailer before it. I can’t wait to watch Sherlock Holmes again because I find that a very excellent film, I can’t say the same about its sequel. 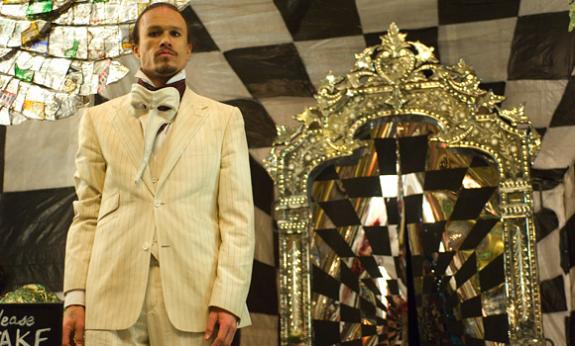 The greatest word to describe The Imaginarium of Doctor Parnassus is interesting. I did find myself enjoying the movie very much at times, but it just seemed rushed and forced at times. Its actually a bit hard to describe, but it just didn’t feel well-made. The effects were fun to look at, a avery wonderland-esgue world has been created here and I love that, but I times the whole movie felt a bit under-payed and too flashy.

Also, I didn’t really understand the casting at all here, what you got here is a bunch of amateurs who are difficult to watch act at times surrounded by two great actors (Plummer and Waits) and one of the greatest actors I’ve seen, who also happens to be a cultural icon (Ledger, of course). But then you are saddened because it turns out that the amateurs are the good guys in the story and the cultural icon I mentioned before is actually a terrible person whose character you basically hate from the get go. And I don’t mean his character is the comelling villain, no that role went to Tom Waits and he totally owned that part, he’s the saving grace of the film. I’m saying his character was just a dick. He wasn’t enjoyable to watch.

Don’t get me wrong, Heath Ledger pulled it off perfectly. He was fantastic and I would expect nothing less, but his character was just unentertaining. The entertainment value of this film came from the the idea of the film and the battle between its antagonist and protagonist. This film was essentially a complex look at the devil and angel on your shoulder. It’s a great depiction of choice, I just wish it was made more professionally.

It may seem like I’m trashing this movie to no end, but the best way to descibe my feelings is disappointment. It just wasn’t as good as it could’ve been. They’re were certainly a lot of pros to this movie. I did enjoy Heath Ledger going into the Imaginarium and becoming a different person (Depp, Law and Farrell) it really worked. The biggest pro to this movie was its antagonist though. I loved Tom Waits in the role as the gambling, and almost charming devil, or as the movie named him, Mr. Nick. I was highly entertained each time he was on screen which wasn’t enough in my opinion. Christopher Plummer also did a good job as well.

The Imaginarium of Doctor Parnassus was a film with a fantastic idea behind it, only it wasn’t able to completely follow through as well as I would’ve hoped. Heath Ledger did an incredible job, but I hated his character, while Tom Waits did a great job and I loved his character. Other than that, things were pretty sub-par. There was no consistency here. Oh well, I’ll have to deal with what I got. I was entertained and I see myself re-watching it a couple times in the future.

I believe when viewing Sherlock Homes, most are looking at it as the Guy Ritchie selling out. Sure the movie will make money with the A-list actors and the action, but what Guy Ritchie brought us wasn’t your cliche action movie with a few big names. What he brought was his signature brand of fun, fast-paced and clever direction in order to modernize a classic character we all know and well. I don’t believe a better director could’ve been chosen.

Shelock and Watson and their London adventures are an almost perfect match for Guy Ritchie’s wit. I can’t believe it took this long to realize it to tell you the truth. I loved Sherlock Holmes, it was a wonderful time at the movies. You sit down and immediately you’re thrown into the story. A classic technique used by Ritchie, he never wastes your time and certainly doesn’t spoon feed you.

As for the actors. Each was fell perfectly into place. Robert Downey Jr. was a obvious choice. He brought that same arrogance he brought to Tony Stark, while being a bit more intelligent. Robert Downey Jr. is really perfect for the leading roles he’s been getting. Jude Law was brilliant and the  level-headed partner Dr. Watson. The duo was absolutely thrilling to watch, they seemed to have so much chemistry it was impeccably entertaining. I also fell in love with Mark Strong from his performance in Rock N Rolla and it was nice to see another great performance as the menacing Lord Blackwood.

Overall, Sherlock Holmes was certainly a well put together piece of entertainment. Sure their were a few overlong action scenes thrown in for fan boy’s sake, but you get past that and what you have is another Guy Ritchie classic worthy of praise. I’m looking forward to a good trilogy to put onto my shelves, at the very least, I know from the ending that a sequel isn’t far out of reach.