The original minds of the Coen Brothers and Quentin Tarantino. Their love for violence, their fantastic and memorable writing and their ability to never let you down, just to name a few. But I think Quentin Tarantino tops the Coen Brothers in his creation of some of the most memorable characters in film. Tarantino puts such a graceful brush stroke on every single one of his characters, making each one (no matter how manner) just plain awesome.

As always it was a difficult list to make because I love practically every character Quentin creates. I unfortunately was not able to make room for many characters I would love to find on a top ten such as this. Mr. Pink and Mr. Blonde are my favorite criminals from Reservoir Dogs who weren’t able to make to list. I wish I had room for Shosanna Dreyfuss of Inglourious Basterds, but she just missed the cut. Anyways, here they are, my favorite Quentin Tarantino characters…

If Candyland is the mountain surrounded by hellfire that Dr. King Schultz describes in his german legend, than Calvin J. Candie is the fire breathing dragon. Leonardo DiCaprio never fails to show off his chops as an actor and he really shines here as a sadistic, savage and charismatic plantation owner. He’s the kind of villain you just despise from the moment you meet him and DiCaprio sells out. It’s a brilliant character that deserved a brilliant performance.

The Bride is my favorite female hero in all of film. Period. Her determination and bloodlust drive the epic force that is Kill Bill. I love every moment of the four hour movie and it tells the tale of her escapades. Of course I love her. She puches her way out of a coffin buried 6 feet under, kills “88” people (not really, but still a large number) with out breaking a sweat and gouges out a rivals eye with her bare hand. Black Mamba is a samurai and the deadliest woman in the world. 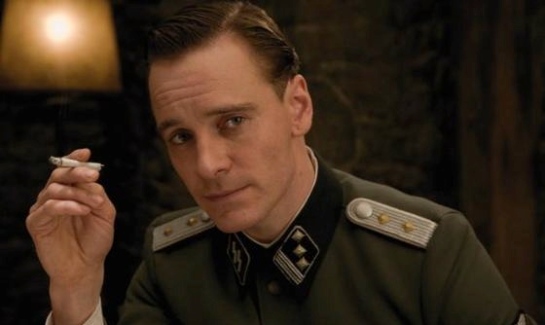 He only makes it in three scenes of Tarantino’s WWII masterpiece, but one of them just so happens to be almost a half hour long and quite possibly the best scene in the movie. Hicox is an english officer bent on helping the Allies in any way he can. What makes him a shoe-in for this list for me is a scene when he’s told of his imminent death. With pride he sucks down his cigarette, picks up his glass of scotch and says one of my favorite lines in film, “There’s a special rung in hell for people who waste a good scotch and since I may be wrapping on the door momentarily…(finishes the glass)… I must say, damn good stuff.” 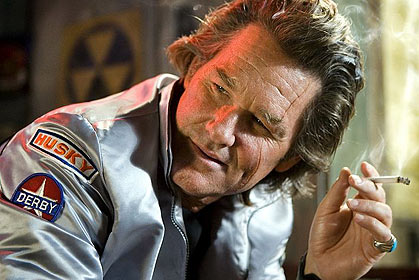 I absolutely love Death Proof. Is it that good of a movie? Most would say no probably, but I have a blast with every single time I’ve watched it. I think for the most part I love the movie because its driven by a character I love. The psychopathic killer, Stuntman Mike. A sweet talkin’ charmer who happens to kill girls with his car. He has played many bad asses in his illustrious career, but I don’t enjoy watching Kurt Russell nearly as much as I enjoy him as this bad ass.

Bill is simply what he calls himself, “a murdering basterd”. Look deeper though and he’s still a murdering basterd, but also a wise samurai with a broken heart. Every single line Bill has is uttered with sauch subtle grace and beauty by David Carradine. Every single moment is made quite epic by his presence. We don’t even see his face for the first half of the movie. Instead, we get a few shots of his hands, his sword and his cowboy boats slowly walking over to the half dead corpse of the woman he loves and is about to shoot in the head. Bill has a way a about him that makes him hated and loved by all he’s touched by. I for one just love the guy.

I like to imagine that Tarantino sees a bit of himself in Dr. King Schultz, a man who could never truly understand Django’s pain and struggle, but who would never the less help Django in any way he could. Dr. King Schultz walks into Django’s life very suddenly and they instantly hit it off. He says it himself, Schultz “despises” slavery and he sees to the freedom of a man he was meant to meet. Together they form a bond willing to stand up against the atrocious tyranny of slavery. He’s a charming man, a wise mentor and a friend.

Known to his enemies as Aldo the Apache is a nazi-scalping aficionado and the leader of the band of renegade jews sent to do as much damage as they possibly can against the Third Reich. He bares a lynching scar across his neck and we don’t know why, but I love it. Aldo goes through no transition or arch as a character and that’s the reason I love him. We know what to expect out of him. We know what he loves and we know he’d like to be doing it till the day he dies and that is “killin’ nazis.”

Jules Winnfield is by far one of the greatest movie characters of all time. A notorious hitman touched by the grace of god and changed spiritually forever. This is by far Samuel L. Jackson’s best and most iconic performance. “Hmm, that is a tasty burger.” I love every single violent and philosophical induced moment with this “Bad Motherfucker”. You can’t talk about Quentin Tarantino movies and not mention the awesomenous that is Jules Winnfield. From the bible verse he recites before killing somone to his rightfully stitched wallet, I can never get enough of him.

In Django Unchined, you’ll find the greatest hero Quentin Tarantino has ever created. I never want anything bad to happen to Django and his love, Broomhilda. From the moment he is released from his chains I am rooting for him. He’s the definition of a badass and he’s a righteous man, a hero looking for retribution. Django is reminiscent of a mighty knight riding in to save the woman he loves. You love him and his woman and his journey, you hate the villains that stand in his way and to watch his wrath unleash when it goes down is nothing short of breathtaking.

“The Jew Hunter” is one of the greatest characters in film and by far the greatest character Quentin Tarantino has ever created and probably ever will create. It took him 15 years to top the character Jules Winnfield. I seriously doubt he’ll ever be able to top Hans Landa. A nazi is probably the most hated figure in history, but finally someone had the guts to give one some depth, and Col. Hans Landa is the result (played to nothing short of perfection by Christoph Waltz).

Col. Landa is actually a man who doesn’t buy into the nazi propaganda and instead is just doing his duty and he’s damn good at it because the S.S. officer is also a detective. It really doesn’t get much more interesting than an intelligent nazi colonel who intertwines through the threads of the events and people around him, eventually betraying his country in order to secure his survival and happy future. Col. Hans Landa is a despicable mastermind with no cap on his malevolence.