One of the most common motives for a character in a film is vengeance. It’s such a common motive that films centered around vengeance have basically become a genre all their own. This is a list dedicated to the films that made revenge into an art form. Its such a classic tale, to see a character wronged and then enjoy the subsequent actions that character takes in order to usually get well-deserved revenge. Here are my favorite films where the act of vengeance are key to drive the plot. 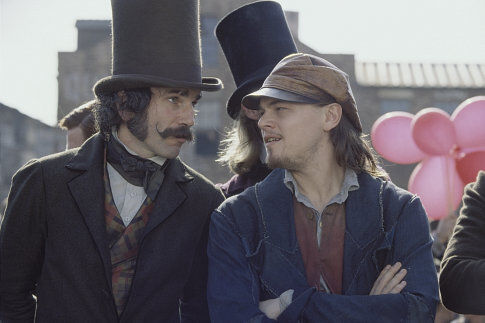 Martin Scorsese’s gritty look into the lives of gangster’s in 1800s New York was driven almost solely by the fact that the main character, Amsterdam (Leonardo DiCaprio), wanted nothing more in the world than to kill his father’s killer. The sadistic basterd, Bill “The Butcher” Cutting, was played to perfection by the great Daniel Day-Lewis because we wanted him dead almost as much as Amsterdam.

Oldboy was able to succeed in doing what no other film was able to do. It was able to take the act of vengeance to the next level. Oldboy tells the tale of a man imprisoned for 15 years and the days after his imprisonment, in which he attempts to figure out the why, the who, and how to best exact his revenge. Oldboy is not for the faint of heart, but if you know what you’re getting into you won’t be disappointed.

The graphic novel based science-fiction film about the not-so-distant future is nothing short of a masterful act of vengeance. V for Vendetta is such a monumentally enjoyable film that it astounds me. V for Vendetta is amazing in the way that the protagonist isn’t just driven by vengeance, but also justice. The people who wronged V didn’t just wrong him, they wronged a country and they deserve exactly what they get.

Tim Burton has made some brilliant films, but none were nearly as good as his dark yet beautiful look into the physical and mental casualties of vengeance. Sweeney Todd: The Demon Barber of Fleet Street is unquestionably the most beautiful of all Tim Burton’s films. Johnny Depp gives the performance of his career as the vengeful barber from hell. This is my favorite musical and one of the greatest tales of revenge ever told.

Beneath the classic detective tale, the mystery and the pitch-perfect references to film-noir, Brick is the tale of a loner getting back at a world who took away the only thing he ever loved. Brick is a truly brilliant crime drama set in the confines of a high school and where that could easily become corny, Brick stays serious and manages to keep you involved until the beautiful ending that you crave for from the second you start putting the puzzle together.

I would just like to make this clear, Unforgiven is the greatest western in existence and one of the greatest films ever made. It is undoubtedly my favorite of the movies listed here, it is however not my favorite tale of vengeance. There’s a lot more substance to Unforgiven thematically and even when it comes to the plot. It’s not a tale driven simply by vengeance, so I am certainly welling to put it at number 5, but the top four spots are more fitting for solely tales of revenge.

4. Once Upon a Time in the West

Sergio Leone’s masterful take on revenge is not only unmistakably brilliant, but also unique. Once Upon a Time in the West is unique in the way that it establishes a truly cold-blooded basterd of a villain in the character Frank (played spectacularly by Henry Fonda), but doesn’t establish that the movie is actually a simple tale of revenge until the final showdown. Frank is one of the most villainous characters ever put on screen throughout, but we don’t know the true extent of his wrath until the second before he’s shot in the chest.

It’s pretty self-explanatory why Memento is this high on the list if you’ve seen the movie and that right there is a statement all its own. Quite honestly, Memento is one of the most original and refreshing films ever concocted. It’s the innovative tale of a man bent on revenge for the murder of his wife, unfortunately that task is made rather difficult due to the fact that he has short-term memory loss. He constantly has to take notes and get tattoos in order to stay on track, but he never knows who he can trust whether that be his best friend or even himself.

Ridley Scott’s Gladiator is so utterly pure in its tale of good vs. evil. What you get in the film Gladiator is a hero of almost mythical status, a general who becomes a slave, a slave that becomes a gladiator and the gladiator that defied an empire. You also get one one of the most despicable movie villains in film. There are many villains I love in film, The Joker, Hannibal, Anton Chigurh, Hans Landa, etc. Commodus is not one of those villains. I hate him almost as much as I hate Nurse Ratched and that’s a lot of hate.

Long story short, you basically love Maximus and hate Commodus. You cannot wait until he is able to exact his well-deserved revenge and that’s exactly what you get. Gladiator is a beautifully epic, yet simple film and that quite honestly is what a true tale of vengeance should be. Gladiator is one of the greatest films in existence and is well deserving of a spot on a list of the greatest tales of revenge ever put on the silver screen.

With his blood-soaked masterpiece, Kill Bill, Quentin Tarantino manages to perfectly epitomize the idea of a film centralized by the act of vengeance. There is truthfully no story of revenge that was as magnificent, beautiful and epic as Kill Bill is. Once again, its a generally simple tale, what  you see is what you get. A woman is betrayed, her family killed and due to a bullet to the head, put into a coma.

The people responsible are her former associates and the man she once loved, Bill. After four years in a comatose state, she wakes up and goes on a killing spree with a single agenda, see title. Kill Bill is both a tale of revenge and a journey and like any amazing journey, there are highs, lows, interesting characters and experiences that all lead to a single climax.

The climax in Kill Bill is one you’re forced to crave for four amazing hours and what you get is one of the most satisfying scenes in the history of film. Quentin Tarantino always seems to have a way of creating some of the most memorable moments in film and does nothing short of that when he created the greatest the tale of revenge of all time. Kill Bill is one of my favorite films in existence and can’t be described in a greater way than to say that it is without a shred of doubt the greatest tale of revenge ever told.